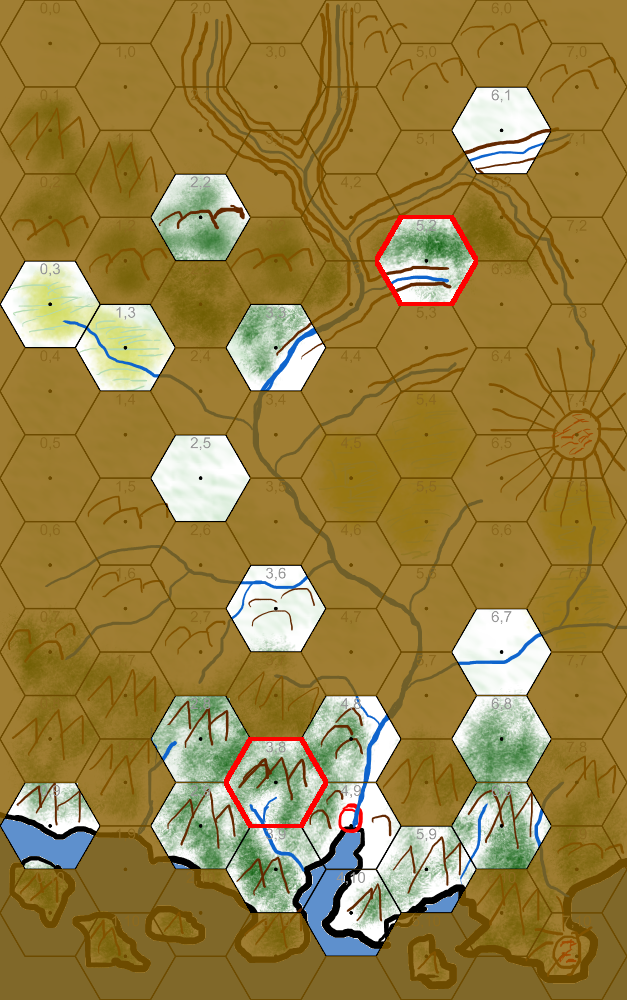 Just to the west of the Trade Outpost there is a large rock outcropping overlooking the river valley. The Natives frequently use it as a lookout point, and the inhabitants of the Trade Outpost swear they see strange lights there in the night from time to time. Footprints (about 1 yard, with claws) of some gargantuan creature have been pressed into the very rock itself - these are the footprints of the mythical Bandersnatch. Not far from the lookout point is a secret cult site of the local chapter of the Wendigo Cult where they feast upon human victims during nights of the New Moon. Jacob Krol from the Trade Outpost attends whenever he can.

The Northern Woodlands are split apart by the river valley and its side canyons. The larger, western area is home to scattered groups of adlets who will fight any intruders. The smaller eastern part of the forests is much safer, as the adlets are kept away by a small group of werebears - about a dozen individuals. These all used to be members of the Inland Tribes, as members of the Coastal Tribes almost always join the Skinwalkers after contracting lycantropy. Unlike other forms of lycantropy, becoming a werebear does not make the victim sociopathic, but nevertheless they prefer to seperate themselves from other humans. Their den is located a small network of caves overlooking one of the side canyons of the river.

Note: A list of all Urbis-related posts can be found here.
Posted by Jürgen Hubert at 1:07 AM