[Urbis] Locations of the Cold Frontier - The Trade Outpost, Part I 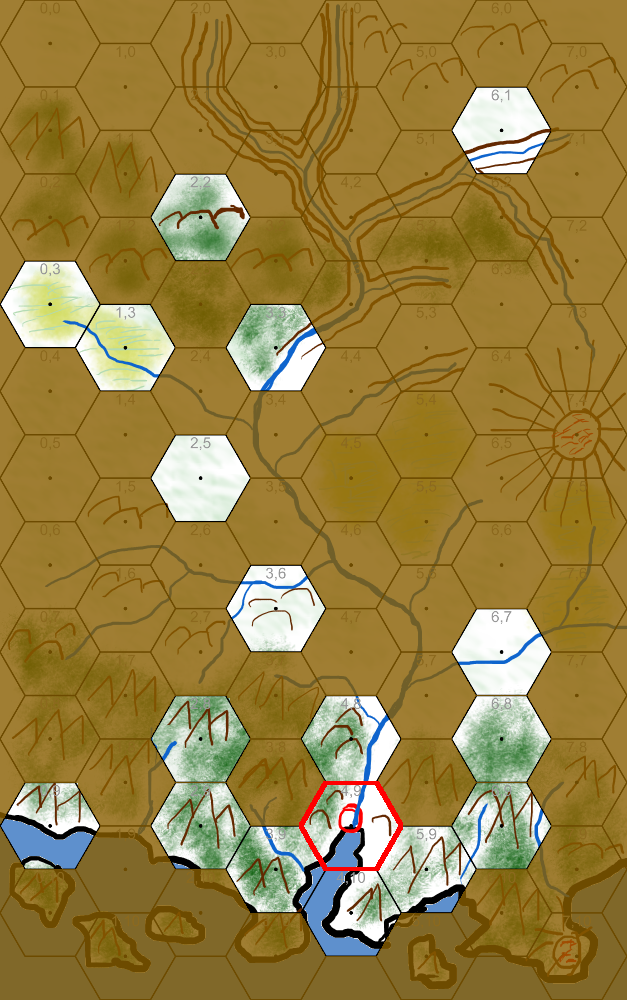 As the "home base" of the wilderness exploration arc and the seed of their later colony, the Trade Outpost - officially "Nardhome Company Outpost #5", though commonly known as "The Hole" - requires extra detail. At this stage, it is also very much a work in progress, and ideas for fleshing it out are highly welcome - I need "complete" this location by the 18th of January, when our campaign starts.

The Trade Outpost is built on the site of an Old Native settlement at the mouth of the river. As this settlement was already at the coast, it was simply reoccupied by the Coastal Tribes when they returned from the ocean, though at much diminuished numbers. For a while, Green Seal Village was the largest and most prosperous of the Coastal Tribe settlements in this part of the Cold Frontier, although their prosperity and better access to the northern plains meant that they had to deal with frequent raids by Inland Tribe raiders, leading to a series of fortifications and lookouts along the river. Several generations ago, most of the villagers were killed by entitites coming out of the oceans. The survivors' tales that circulate among the other villages are contradictory, but currently I am envisioning something like the story The Horror At Martin's Beach by H.P. Lovecraft. As a result, the Coastal Tribes were unwilling to resettle the area, leaving this prime real estate open to the construction of the Trade Depot by the Far Shores Trading Company.

A number of NPCs live in the outpost itself, in addition to the prospectors, trappers, and native visitors who frequently visit. The following is an incomplete list, and suggestions for further NPCs will be greatly appreciated.
I'm also trying to figure out all the individual locations of the Trade Outpost. Again, this is an incomplete list and any help with fleshing out the details would be greatly appreciated.

The main building:
Outside:
Any other suggestions?

Continued in Part II. Note: A full list of Urbis-related posts can be found here.