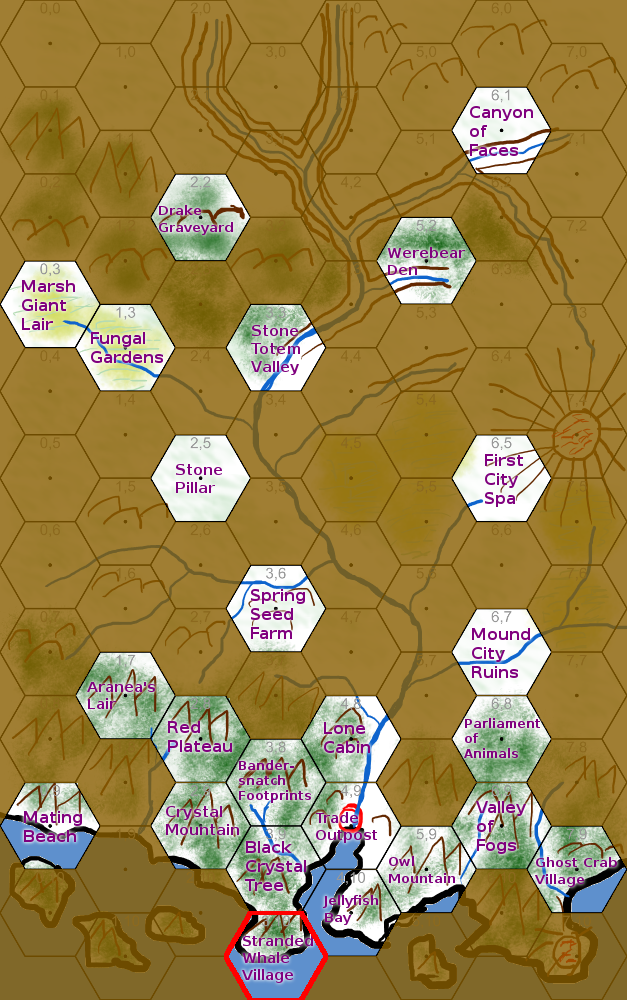 Next on our list of Coastal Tribe villages is Stranded Whale Village - so called because, according to legend, during a time of great hunger a whale heard the wailing of the tribesfolk and decided to beach itself, sacrificing itself so that the humans could eat. Not surprisingly, Whale is the most prominent totem (and the village are the most proficient whalers in the region), with the leader being Running Rain (male). Other common totems include Orca, Dolphin, Shark, Owl (due to proximity to Owl Mountain), Bat, Raven, and Eagle. The village has approximately 500 inhabitants.

Let's once again look at the Random Nations Generator. The first result for "Government" is Exilarchy. Hmmm... let's say that when the Great Darkness struck, most of the Natives decided to wait it out on the open oceans - but a few attempted a long and perilous journey to the Far Coast, to the south where their kin lived, to ask them for help. They never returned, but the senior shaman (currently Standing Beak, female) has the duty of organizing a great fire on the tip of the peninsula during the solstices and equinoxes in the hopes that this will lead the Lost home one day. As the Speaker for the Lost, he has a great deal of say in the local Council of Elders - he is thought to represent their wishes.

In the "Organizations" sections we get groups like the Illuminati and Majestic-12, which hints that rather more is going in this village than is first apparent. Perhaps the Speaker for the Lost functions as the leader of a "shadow government" for the local Coastal Tribes - a secret, invitation-only group which attempts to manipulate events from behind the scenes. Quite a few shamans will likely be members, as will be the leaders of the Skinwalker shapechangers who serve as their secret enforcing arm. And speaking of the Skinwalkers, Bat is worshiped as a totem here - so let's make the leader of the local Bat Lodge (Springing Ears, male) the leader of the Werebat Skinwalkers as well. So, how to call these Illuminati of the Coastal Tribes? I think "Hidden Fire Society" has a nice ring to it, since it connects to the actual signal fire of the village...

Among the "Major Personalities" we have P.T. Barnum and Figaro, which I interpret as the leader of the Raven Lodge ("Laughing Shadow", male) being a major showman and entertainer - not to mention a trickster, which the PCs will likely experience first hand. We also get Hashim ibn Hakim, also known as the "Veiled Prophet" - let's say that whenever Standing Beak takes on the role of the Speaker for the Lost, she wears a mask and even those who know about the person behind the mask never refer to her by that name while she fulfills that role. Quite possibly the mask is strongly magical and has enchantments of protection, concealment, and illusion.

Among "Major Political Issues" we get By their works shall ye know them, which is about religious groups reinterpreting reality to suit their own agenda. This one is obvious - the Speaker pretends to speak for the Lost and tolerates no defiance, but in reality speaks for the agenda of the Hidden Fire Society. Another result is Hanged Census worker had "Fed" on chest - perhaps the Hidden Fire Society is prone to carving their symbol into the corpses of those who offend them, and while everyone gets the message, nobody talks about the Society in public. I am thinking of the following symbol for them: 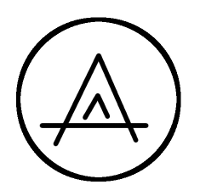 One of the "Major Products" of the village is Poison, which makes sense - poisons are very useful for controlling... problematic people. Obviously, the PCs might end up being one of their targets. On the flip side, expert proficiency with Homeopathic Medicine could establish the local shamans as the greatest healers of the region (especially if people come to them after being subjected to one of their slow-acting poison - nothing like being near the threshold of death for questioning some of your life choices).


Note: A list of all Urbis-related posts can be found here.
Posted by Jürgen Hubert at 11:29 AM