I am currently on a job hunt, which means that I will likely have to move to another city in a few months once I find a job - which in turn means I will unfortunately have to abort my current Cold Frontier campaign. Now, ideally I would want to "reboot" the campaign with a new group. But it's always a good idea to have a backup plan, and for this the Star Wars: Edge of the Empire game has caught my eye.

As I have come to enjoy the "sandbox" nature of the Cold Frontier campaign, I want to establish a sandbox for this campaign as well. The PCs would start as a small crew of smugglers and similar never-do-wells in a fairly confined area of space - a single sector or so - and have Obligations that keep them there for a while. That doesn't mean that eventually the PCs won't be able to join the Rebellion, become a new generation of Jedi, or otherwise traverse the galaxy - but the initial focus of the campaign would start on this reasonably small scale so that the protagonists - and their antagonists as well - have space to establish themselves and grow.

The region of the galaxy I have picked for this campaign are the Kreetan Narrows (in particular, the Suolriep Sector), a region that used to be part of Hutt Space but which was annexed by the Empire when they pursued Separatists in 19 BBY (the "starting time" of the campaign is set approximately at the destruction of Alderaan). The primary reason for this is that I have the supplement Lords of Nal Hutta, which I want to get a lot of use out of - the Hutts make great patrons or antagonists for crime-focused games. However, running a Rebellion-era game set outside the influence of the Empire proper seems just wrong. Thus, the Kreetan Narrows represent the "best of both worlds" where both power blocks clash. And the Suolriep sector seems to be the best choice within the Kreetan Narrows, as it represents a "bulge" into Hutt Space with an especially long border. Here are two maps to showcase its position: 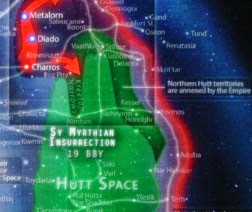 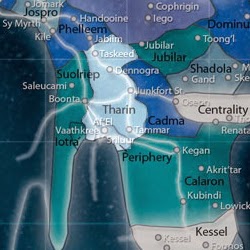 Let's think about the strategic implications of this. The Hutt Kajidics (clans/cartels) who used to control the Narrows lost a lot of territory to the Empire, and with it a lot of wealth and influence. They are prudent enough to realize that they cannot openly oppose the Empire, so military reconquest is right out. However, the Hutts were never known to be graceful losers, so if they can subvert Imperial control of the region without an obvious slime trail leading back to them, they will. I expect lots of junior Hutts in the region trying to increase the influence of their respective kajidics - while also revelling in the relative freedom from their elders (since those don't want to appear to be directly involved). Since the territory is now "up for graps", these junior Hutts will also spend much time and effort on covert wars with each other.

During the annexation, the Hutts were, of course, evacuated in a hurry. But beyond leaving their palaces and hidden treasures behind (I expect that there will be a lot of "Maps to Lost Hutt Treasures" for sale in the region...), they also had to leave many of their servants and slaves, which gives us a start on the "List of Prominent Species" for the sector (which I would hand to the players as suggestions for player character races, as well as background information):

Now let's move on to the local Imperial presence. The Empire took the Narrows from the Hutts via overwhelming force, and it doesn't want the Hutts to forget this. Thus, the garrison will likely remain significant, with the largest portion at the sector capital away from the border and a smaller "forward base" closer to it. The forces will be focused on patrolling the very long borders to Hutt space. However, they are not particularly effective in this, as corruption is widespread - the Hutts have their ways of getting hooks into the right people. The Sector Moffs are replaced on a fairly regular basis, either because it was discovered that they let themselves bribed by the Hutts or because the Hutts succeeded in intrigues against them. Betting pools on how long the current one will last are frequent (though illegal).

Now let me digress a bit on how I want to portray the Empire. Given its general evil and its pro-human bias, many are inclined to portray them as Space Nazis when it comes to its interaction with non-human species. However, Space Nazis are the shtick of the Warhammer 40K universe, and anyway as a German I tire of Nazi variants quickly. But after reading some columns by the War Nerd, I've come to the conclusion that the British Empire would be the better model for my campaign (appropriate, since so many officers of the Star Wars Empire were played by British actors.).

So... while most of the ruling elite of the Empire of course things that humans are superior to everyone else and should run things (except for Palpatine, who distains every non-Force user equally and only sees himself as fit for rule), they are not generally out to exterminate or mass sterilize aliens (unless they are really troublesome) - they just want to see them in their proper place so that they can be "civilized" by the humans. Having some non-human servants? No problem. Having a Twi'lek mistress? You dog, you. Having deals with nonhuman merchants, industrialists, or even criminals is also not a problem, as long as the bribe money keeps flowing and they don't make any problems for humans in general or Imperials in particular. Aliens just aren't allowed to hold any official power over humans.

And one thing the British knew how to do (and which the Nazis were ideologically incapable of) was to play the game of Divide and Conquer. While the British certainly had no problems with sending their own young off to die in some pointless colonial war, there was only so many young British people available - so it was a lot more efficient to make some other ethnic group die for you. Support one local tribe against the others, give them weapons and point them into the right direction, and they will be so busy tearing each other apart that they won't be able to resist your rule.

The Star Wars Empire will certainly use this strategy as well (especially since it feeds local hatreds, which Papatine would approve of). In the Suolriep Sector, a prime candidate for "local flunkies" would be the Iotrans - no mention of how they fared under the Hutts, but their penchant for order, stability, and militarism would make them fairly useful patsies. Thus, the Iotrans get to fight all those troublesome remnants of the Hutt servitor species while the Empire attempts to gradually attempts to assimilate the sector.

And another trick of the British Empire that the Star Wars Empire is likely to emulate is that when you colonize a new place, you should get colonists from the far ends of your empire to settle it instead of relying on native labor. These colonists will have no local allies, and are thus dependent on you for protection and prosperity - making them a lot more loyal than the natives, who will resent you anyway. Obviously, the prime candidates for colonists and the administrative upper class in the Suolriep Sector will be humans - but some nonhuman species who have done reasonably well under the Empire might join in as well. They might be only second-class citizens under the humans, but that's still far better than a third-class (or worse) citizen like the natives. The Imperials would certainly throw them a few scraps of privilege to make them feel "favored". Divide and Conquer.

These are my first thoughts about the "macro" level of the Suolriep Sector, before I delve into the details of the individual worlds. But before that - do you have any suggestions? I am hardly a big expert on Star Wars lore, and if you have any suggestions on expanding on this material I am all ears...
Posted by Jürgen Hubert at 7:04 AM