After discussing the main Rebel stronghold in the Suolriep Sector in the previous post, let us go through the list of the sector's worlds to see if we can find anything interesting.

Alsapin has the "Alsapin Casino" associated with the criminal Kassandre family - which was killed when the Kerestian bounty hunter Limna Yith bombed the Casino during the Galactic Civil War. Which might happen any time between the start of the campaign and 3 ABY (when she apparently moves on to other things). Both represent NPCs that the PCs might encounter, and eventually they might get involved in the bombing plot itself - either to pull it off, or foil it (more likely the latter, if the PCs have any moral scruples).

Her entry also mentions a connection to one Sprax, who is a Nalroni Vigo in the Black Sun cartel. He primarily operates in the Periphery Subsector of the neighboring Tharin Sector. 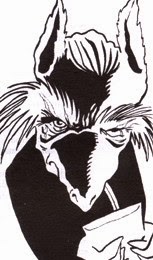 He is described as a "fence and patron of smugglers". He would certainly have interests in the Suolriep Sector as well (presumably, this is the reason for the bombing). One of his rivals is Durga Besadii Tai, a fellow Black Sun Vigo... and also he leader of the Besadii Kajidic, one of the oldest and post powerful Hutt clans and one of the primary rivals of Jabba himself! Durga also has had problems with the Rebel Alliance in the past, thanks to their raid on Ylesia (Durga also gets some space in Lords of Nal Hutta).

The Dernantine System has the planet Boonta, which is named after the hero Boonta the Hutt, who defeated Xim the Despot thousands of years ago and was deified after his death. The planet itself never fully recovered from the devastation that both that war and the later Great Sith War. Its current claim to fame is the Boonta Speeder Race, which was established so that the slow little humans didn't feel left out because the Tatooine Podraces were too tough for them. There are also some other extreme sports on the planet, such as the Zed'hoffa Orbital Diving Competition over the Living Pits, whatever they are - no doubt that diving into the wrong pit is lethal. All of this is run by one Yenchara the Hutt, who is of the Desilijic kajidic - Jabba's cartel. Presumably, he also runs most Desilijic activities in the sector.

The Komnor System entry is interesting - it was the home of "a large clan of Hutts". Around 0 ABY (i.e. shortly after the campaign starts), "a vicious warlord arrived in the system and evicted the Hutts from their home." The evicted Hutts then complained to Jabba, who sent a bounty hunter to assassinate the warlord.

...okay, why does a "vicious warlord" coming out of nowhere decide to conquer a Hutt-controlled world, out of all places? The Hutts are no pushovers - or at least, they have minions who are no pushovers. And why is the Empire sitting idly by when someone conquers what they see as one of their own world, when that would be a great time to show that they are in charge? The best explanation I can come up with is that the whole thing was engineered by Jabba to bring a minor kajidic under his control. Unless I can come up with a better scheme. In either case, there is plenty of opportunity for the PCs to get involved with the conquest and its aftermath.

Laboi II is a rather inhospitable planet thanks to its 4000+ hours day/night-cycle. More interesting are the native sapients, the Laboi - who look like this: 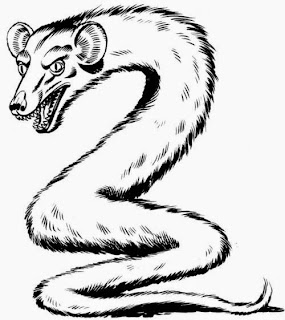 They are also carnivores who grow up to 10 meters long - and some of the females have natural telekinetic abilities. Furthermore, their entry mentions that the few who escape the planets often become crime lords in competition to the Hutts. So... let's say that the secret leader of the Kassandre Family (the ones that run the Alsapin Casino, above) is such a Laboi female. It's appropriate for a telekinetic to control gambling operations, after all...

The Lythia system was home to the Lythian Pirates who were active in the years before the Clone Wars. Thus, it's probably a good place for hunting for pirate treasure.

The Nomaria system is home to the Nomarian Thunder Sharks, predatory fish that go into feeding frenzies. I expect that every major crime lord in the sector worth his salt will have a tank of these creatures, for disposing people who have annoyed them (except for Laboi crime lords, who will simply eat them themselves).