[Urbis] Locations of the Cold Frontier - The Red Plateau 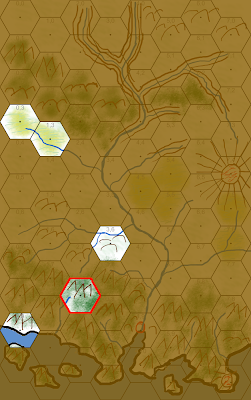 When the Prehuman Mothman civilization built the Black Pyramid housing the God Chamber, they needed lots of raw resources for this project. For this purpose they sheared off an entire mountaintop rich in ores and transported it to the crater to the north. While the edges have eroded somewhat, the plateau remains unnaturally flat to this day, hinting at its unnatural origin. Were the PCs to examine the plateau in detail, they would discover numerous iron ores reaching up to the surface, making this an excellent location for stripmining.

However, other details might distract them. The most noteworthy feature of the plateau is that every single plant growing on the plateu (mostly mosses, shrubs, and small birch trees) has a red tint in its leaves, bark, and so forth. Furthermore, at the center of the plateau there are a number of large wooden totems not commonly venerated by the Coastal Tribes, including Wolf, Bear, and Bat. They will also find a stone basin encrusted with blood. If they search the area carefully, they will find a hidden chamber with several Transformation Masks depicting the animal Totems above.

The truth is that this plateau is the central cult site of the Skinwalker Society, a secret group of natives who deliberately infect themselves with lycantrophy (or are recruited after they were accidentally infected) and control the more savage side effects with the help of friendly animal spirits (avoiding the overall personality changes of classical lycantrophy and granting them better control over their animal and hybrid forms). They see themselves as the secret protector of the Coastal Tribes and will eliminate problems quietly and efficiently. The red tint of the plateau is a side effect from their many rituals. During the nights, the animal spirits will patrol the plateau and chase down anyone who meddles with the totems and the transformation masks. Needless to say, during the nights of the full moon the plateau is a very dangerous place to be for any outsiders...
Posted by Jürgen Hubert at 12:01 PM