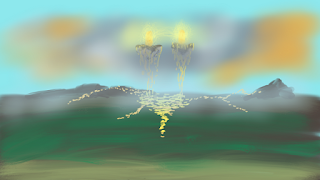 I like the setting of Monte Cook's Numenera - it's science-fantasy atmosphere in an impossible distant future built on the ruins of many prior civilizations scratches a lot of itches for me. However, I am not particularly fond of the Cypher system it makes use of. Going into my full list of issues with the system is beyond the scope of this blog post, so let me just focus on one aspect: I find the system for character creation and growth too limiting.

Yes, I am aware that the descriptor/type/focus split allows for a lot of possible combination, but in the end it still locks you into a fairly rigid level and advancement system - but if any setting should allow for totally wild character archetypes, it's Numenera! What if you want to specialize in stuff that's covered by a focus? Or a particular set of skills? Or want to combine powers of two foci? Or want to play a visitant (non-human) who also has a focus?

Which is where GURPS, my favorite system comes in - providing these options becomes ridiculously easy.

The base for our Numenera conversion becomes the "Powers" system from GURPS Powers, which provides "ready-made" packages of advantages which can be taken individually and modified further with enhancements and limitations. For example, the "Cold/Ice" and the "Heat/Fire" powers both have the "Innate Attack" advantage listed, but the form these attacks take will obviously be different for both powers - with the "Cold/Ice" power, you might throw around icicles or just cool down the body temperature of your opponent, causing internal damage, while with the "Heat/Fire" power you could project a jet of flame or be wreathed in an aura of fire - all these and many more can be specified in GURPS, and this kind of variety is also true for many other advantages in the system.

The following powers from GURPS Powers are suitable for Numenera:

*There should also be an equivalent "Anti-Dimensional" power which blocks entities from and access to other dimensions.
** "Spirit Control" here means the "spirits" of the Datasphere, the global information network that spans the planet.

The Time Mastery power would also be genre-appropriate for Numenera, but the GM might not be willing to open that particular can of worms.

The "Phasing" and "Speed" powers from GURPS Supers are also available.

Each Power in GURPS also has a so-called "Power Modifier", which specifies the source of the power in question - which also usually specifies the weaknesses this power has.

The following Power Modifiers from GURPS Powers are appropriate:

Again, "Spirit" means beseeching or manipulating the entities of the Datasphere.

The following Power Modifiers from GURPS Supers are also available:

Finally, I would also introduce a "Dimensional" Power Modifier for powers which work by accessing other dimensions, which can be blocked via both special advantages and skills (like a "Anti-Dimensional" power) and special technology, form a total modifier of -10%.

Let's say a character wants to grow some claws for close combat. Is it some kind of inborn biological process? Then he uses the Body Alteration power with the Biological modifier, or possibly Mutant. Do nanites emerge from his body and reshape his hand? Also Body Alteration, but this time with Nanotech. Has he just trained so extensively with that secret order of monks that he can use his life energies to make his hands work like claws? Then it's Bioenergy or Body Control with the Chi limitation. Each starts with the same base effect - Claws - but each approach is different with its own strengths and weaknesses, and each suggests different themes for further powers of the character.

The GM might initially limit PCs to one power source, or two. Learning how to access new power types and power sources can be the focus of entire adventures or campaign arcs - but it's possible in GURPS, unlike in the Cypher system where your focus will never change.
Posted by Jürgen Hubert at 7:03 AM