Ah, Gankorou - possibly my favorite NPC in my old Exalted campaign. A Fair Folk noble, he was the first major personality the PCs encountered as they ventured into Creation. He had abducted a number of villagers and dream-eaten then, and the PCs were sufficiently heroic that they demanded that they marched right into his Freehold, demanded that he handed them back and cease preying on the villagers.

Gankorou, of course, was delighted that a bunch of Solars were coming to visit him and quickly agreed to this, provided that one of them could defeat him in a duel. The Twilight accepted (they didn't have a Dawn Caste Solar at the time, and the Twilight was always the biggest twink in the group) and soundly defeated him. Then Gankorou - true to his work - handed his captives over and closed the doors of his Freehold after them. Then they discovered that the victims were dream-eaten, and what that meant.

Then, about two months later when the Night Caste was sneaking around the City of the Steel Lotus, she stumbled across Gankorou again - who was delighted to see her, and was very helpful all of a sudden. From there, he became a recurring NPC whose exploits included the following:


The visual design of the character, the initial personality, and of course the name of the character were inspired by the Count from Gankutuou, an anime retelling of The Count of Monte Cristo.

Of course, the character evolved considerably from its origin throughout the campaign. And my version was not motivated out of a desire for the most fiendish revenge possible, but provoking the Solar protagonists for the Lulz - which is a rather typical stance for Fair Folk nobles. The trick, of course, is how to continue provoking Solars and living to enjoy the experience again and again - and, like the Count, Gankorou was very adept at seeming very helpful and friendly while he plotted to stab you in the back. It's a testament to his skill - and his entertainment value within the campaign - that he lasted as long as he did.

I had established that he feeds on Temperance, although I do no longer remember his original caste. Looking at the possible combinations in Graceful Wicked Masques, a Panjandrum (a Shadowed Diplomat who also feeds on Conviction) seems like the most appropriate - he was a proper little rules lawyer.

However, what he lacked in the original campaign is a proper entourage - he is the lord of a Freehold, after all - and I want to rectify that. From what I remember, his Freehold had the appearance of a crystal cave (let's make it a Level 2 Earth Demesne, which means that the cave complex is about 200 yards across). I also remember that he had blue hobgoblin hounds. But what else is in his lair? Let's consult my old favorite, the Random Nations Generator, to find out.

For government, we get Ethnocracy, meaning that one of the groups of Fair Folk living in the Freehold is lording it over the others - presumably with Gankorou's consent, who might style himself the Lord Protector of his Freehold, instead of the ruler. He might even arrange for semi-regular changes in who the current ruling faction is, for his own amusement. One of the factions are obviously the Hounds, but who are the others?

For organizations, we get the Skull and Bones society - so let's say that there is a group that serves actual skulls, claiming the skulls to be their honored ancestors. This is nonsense, of course - but the skulls say so too, and would you argue with a talking skull? We also get the Order of the Veiled Prophet, so there is another group of Fair Folk who wears veils all the time. They are not actually wearing veils in order to hide their faces - it's veils all the way down.

Among the major personalities, we get Agnes of Rome. Considering how the relics of Catholics were worshiped, the "Skull of Holy Agira" might be the center of worship for the local chapter of the Church of Balor - Agira being one of the Fair Folk who were allegedly killed during the crusade. She and some other skulls of "lesser" saints hold court in the local chapel. Another entry is Théodore Géricault - and an artist who is famous for painting pictures of human suffering and insanity is going to fit right in with a Fair Folk freehold. "Thericalt", then, is the leader of the Veiled Ones - whose purpose in life is Art, and who require a steady stream of human subjects for their Art.

Thus, the Veiled Ones are the "official" leaders of the Freehold (as opposed to the true leader, which is Gankorou). They oppress the other Commoner Rakshas, who find solace with Agira and the Church of Balor, and send out the Hounds in order to retrieve more art subjects. Both Agira and Thericalt are Commoners as well - albeit Heroic ones with more self-awareness than the others.

While a human settlement would deserve further details from the Random Nations Generator, this is probably enough for our purposes - after all, this is not a real settlement, just an facsimile of one that exists for Gankorou's entertainment. So all that remains to do is to place the cave on the map. Since I want it to be fairly close to the Emergence Cave and in the "natural" traveling direction of the PCs (that is, towards the Jade Plum Citadel), I will place it at <5,9>. 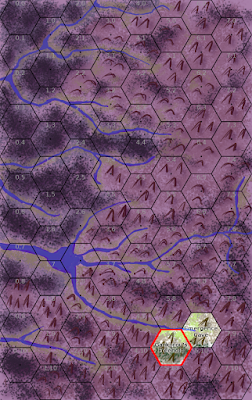