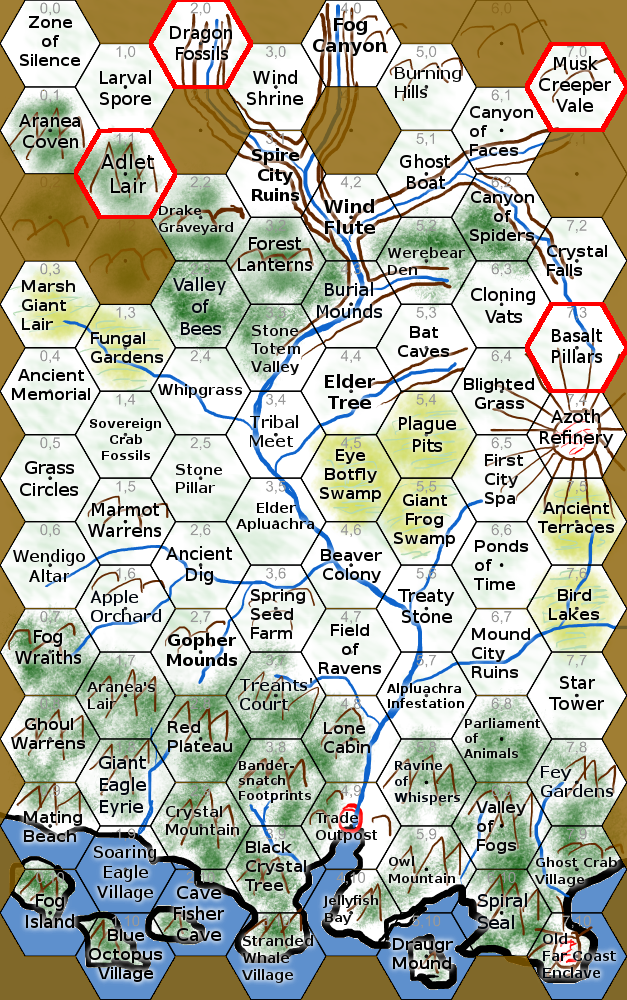 The small rivulets pouring down the northern flanks of the volcano have exposed numerous basalt pillars which now rest in odd angles against the ground - forming a veritable labyrinth that is hard to traverse. Swarms of giant fire beetles will crawl around the area, though they will normally be non-agressive towards visitors. The same cannot be said for the giant funnelweb spiders which lair here, and it is all too easy for a visitor to stumble across one of their cunningly camouflaged webs.

Among the cragged peaks of the Northwestern mountain range, the Adlets have chosen a single bare mountaintop as the center of their tribe's culture. Here, the cold winds blow almost constantly, and they have hauled a number of large boulders to this peak and painted it with the symbols of the various spirits they worship - Wendigo among them. At certain nights, the Adlets come here to dance and how in the wind. There are a number of caves halfway down the mountains which serve as their lair - as they are immune to the cold they don't need it to shelter from the elements, but they do keep their young here to protect them.

A small valley which has warmer climate than the surrounding areas has been infested by Yellow Musk Creepers, numbering 11 individual colonies. They primarily have local animals as servants, but a number of morlocks from the nearby Canyon of Faces have also been infected.

Those who travel along the canyon might spot a large fossilized bone sticking out of the canyon walls. Careful excavation - which is tricky, since it would have to dig deep into the walls of the canyon - will reveal two nearly complete (approximately 25 yards long each) skeletons of dragon-like creatures of an unknown species, apparently locked in a titanic struggle when they died. This would be the crowning exhibit of any museum of natural history, although selling the bones as magical ingredients would likely be more profitable - if the sellers can prove the provenance of the bones to the satisfaction of the customers, as scams revolving around selling dragon bones are rather common.


Note: A list of all Urbis-related posts can be found here.
Posted by Jürgen Hubert at 1:03 PM