Continued from Dispatch 13 - The Road to Ustengrav.

As we enter Ustengrav, we hear voices. I sneak closer, passing a dead bandit on the way, and discover black-robed figures - apparently necromancers, who have reanimated the corpses of bandits to excavate the area! They seem to go through a lot of corpses in their efforts, however.

For some reason, they rush off to a corridor to the left - unfortunately, I don't hear their reason for doing so, as Vrijas has to whisper some concerns about getting lost in this complex at precisely the wrong moment.

Here is a tip for the would-be skulkers in shadows among my readers: Whispers are a very distinct form of noise that carries a lot further than you'd expect. If you have to talk while within range of someone you want to observe unheard, lower your voice as much as possible but don't break into a whisper. And don't talk at all to someone who is listening to someone else unless it is critically important, such as: "Hey, Araneus - there is a Giant Frostbite Spider right behind you!" That's the kind of information you need in a hurry even when otherwise occupied. If you have any other concerns, write them into your diary.

Fortunately, the necromancers don't hear Vrija's not-at-all inconspicuous whisper, only murmuring that the zombies "can fend for themselves" for a moment. Fortunately, the remaining zombie is not, in fact, very capable of fending for itself, especially when it is hit by four arrows from behind. But there are no clues nearby on what the necromancers are searching for.

And as it turns out, the necromancers are quickly overwhelmed by a group of draugr, so it doesn't seem likely that further clues will be forthcoming.

Further into the depths there is a great cavern. Somehow there is light from the ceiling - enough light for large tree to rise from the depths. Eerie flames flicker in the distance, and walking dead seem to patrol the area - not draugr, but skeletons. Are there more necromancers in the area, or is this some long-forgotten necromancer's tomb which the would-be archaeologists had hoped to uncover?

Sneaking further down, I trigger a pressure plate and jets of flame engulf me from the floor. When I finally stop screaming, my murderous minions are less than sympathetic to me for overlooking the trap. Even Vrija mocks me: "Ouch, I'm so clumsy!"

Draugr patrol a feast hall. After we dispose of them, I discover that the food is suspiciously fresh. Bread, cheese, grilled leeks, jazaby berries - they seem at best a bit stale, but by no means crumbled to dust - as they should have been if they were as old as the draugr. Did some living humans get here recently and decide to have lunch? But if so, where are the bodies? Or are they under some enchantment of timelessness - the same that also causes the braziers and torches to burn forever? Or did the draugr emerge from Ustengrav and took the food from some passing merchant or remote settlement so that they could have this mockery of a feast?

We come to another room with the typical sarcophagi of the draugr - but there is also some oil spread around the floor from a spilled lamp. I prepare my flame cantrip, and approach - hurling the fire at the oil just as the draugr emerge. And at precisely that moment, Vrija chooses to race forward to attack the draugr, getting engulfed by the flames as well.

Two portcullises operated by handles in the walls reveal a small enchanter's lab. But while I have collected a few soul gems - even ones with charges - in this dungeon, I feel no desire to dabble in it. Frankly, I always felt a revulsion towards enchantment - trapping some poor creature's very soul and then using that soul to power some magic doodad. While I've used enchanted items on occasion, I feel no need to add to their number. If we have to use them, then the enchanting should be left to true professionals, who know how to make the soul juice last, instead of some dabbler who will only waste the energy.

Frankly, I feel bad enough about consuming the souls of dragons - thinking (if apparently deeply malevolent) beings, even though I don't have a choice in this process and even though the dragons keep attacking me and people around me. Going out of my way to deliberately destroy the souls of other beings for my own advantage is a sin I do not care to indulge in.

We reach the skeletons, which go down easy enough under my bolts. As I explore the area, I find another dragon-adorned wall with ancient runes as in Bleak Falls Barrows, deep at the bottom of the cavern near a small pond. As I approach it, I hear the same chanting and some of the runes begin to shimmer. An ancient memory that is not my own stirs in my mind, and I understand...

and I fade from this world, if only for a short moment. My minions still see me, so I am not invisible, exactly. But Mundus, the material world, has less purchase on me - the ground still holds me, but everything feels... muted.

Time for some experimentation. There were some flames back near the skeletons, and indeed thanks to FEIM I pass through them without harm, exploring a balcony that would have been otherwise inaccessible. There are some further rooms which can only be reached via a series of platforms, but thanks to WULD I manage to jump between them. And a final test - I also learn that with FEIM I can fall from a great height without harm, although I suspect I need to be really careful how I time this, or else I might become tangible again just before I hit the ground. Still, jumping off a cliff in order to avoid pursuit is a neat trick, one I wish I had learned earlier.

We reach a series of three stones which glow as I pass them - and each time I pass one, a portcullis opens, but only for a very short time. Too short to pass through all of them, in fact. Strangely enough, the stones only glow when I pass them - none of the Murderous Minions trigger them. Another part of the Greybeards' test, no doubt - and keeping their tests in mind, I manage to reach the other side with WULD. To my relief, the three portcullises stay open after I reach the other side.

Large cobwebs cover the next area, which is never a good sign - but I am not so distracted that I don't spot the pressure-plates in the path ahead of us. There seems to be no way around them, so I shout FEIM and race ahead - but FEIM doesn't last long enough and I still experience some heat as I finally get out of the traps. Then a frostbite spider spits poison into my face.

Despite my blurry vision I pepper it with bolts, but then a much larger specimen drops from the ceiling. Fortunately, my minions have run after me - apparently, the pressure plates have quickly run out of fuel - and dispatch the creature with ease. 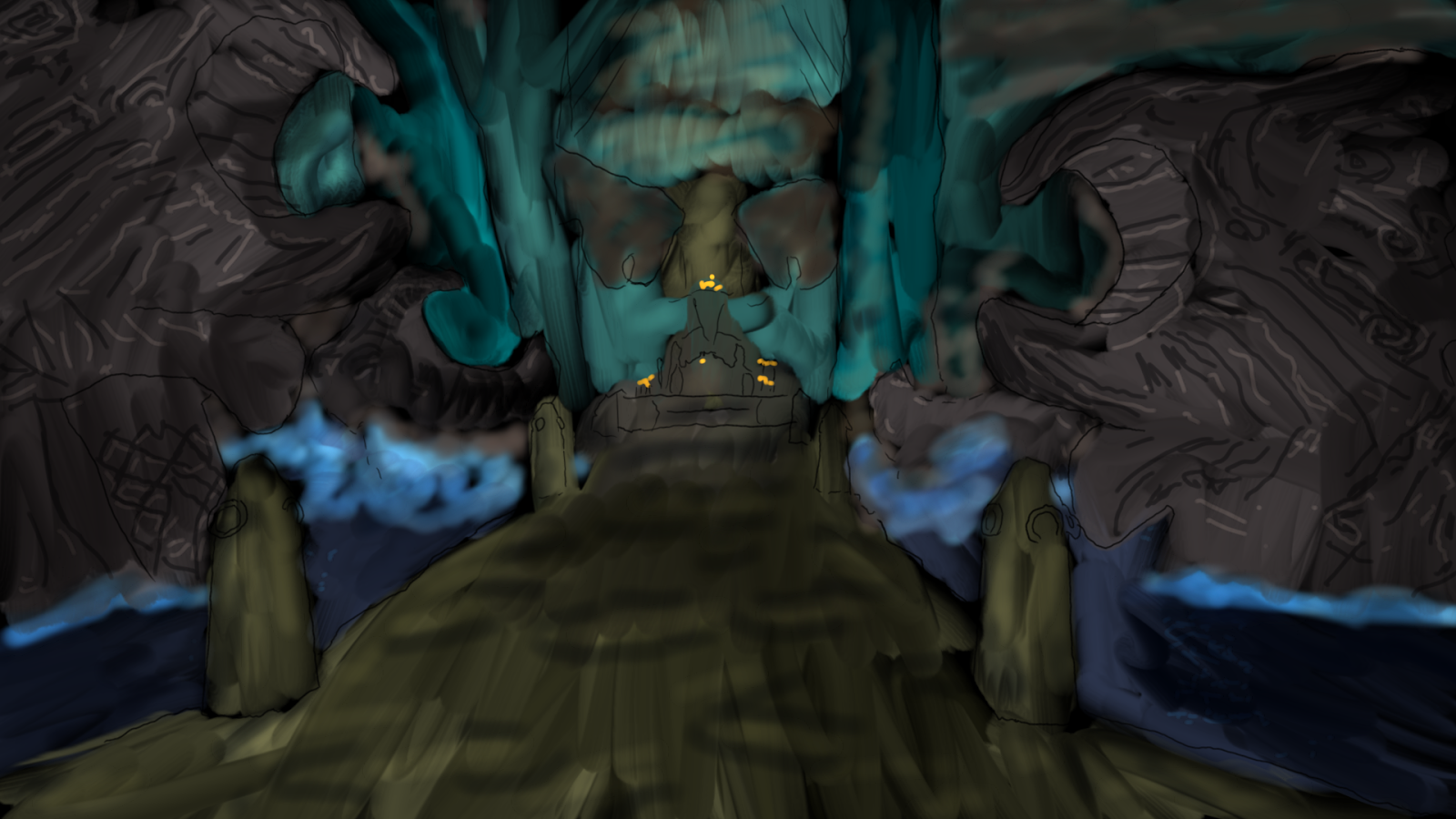 After that, we reach the end of the ruins - massive stylized dragon heads made out of stone emerge from pools of water as I approach a pedestal. But instead of the Horn of Jurgen Windcaller, I only find a note:

I need to speak to you. Urgently.

I smile. Suddenly, this has become a lot more interesting than a simple dungeon fetch quest.

And now I remember where I had heard the voice of Farengar's "reliable source" before.


To be continued. Read from the beginning!
Posted by Jürgen Hubert at 11:44 PM