"The Wikipedia - written by gamers, for gamers!"

That was the basic idea when I created the Arcana Wiki six years ago, and that remains the goal to this day. As any veteran game master or teller of stories knows, pretty much anything can serve as an inspiration for stories if you just look at it from the right angle. The trick is then to find the right inspiration for your current needs and start thinking in the right directions. Streams of high-inspiration material like the Suppressed Transmissions Community are useful, but the posts soon vanish into the archives and are forgotten by most readers. Therefore, trying to sort all this inspirational stuff into a wiki only made sense - it would allow proper indexing, cross-referencing, and brainstorming among its readers.

Most entries in the Arcana Wiki have a fairly standard layout. A good example of this is the entry for the Kowloon Walled City, a former slum region in Hong Kong.

Though some pages (see the "Love Potion" entry for an example) start with an inspirational quote, most will start with a "Basic Information" section which tries to explain the basic concept of the entry in a fairly factual manner (though not usually as dry as the Wikipedia, and we don't concern ourselves with citations as much, either). 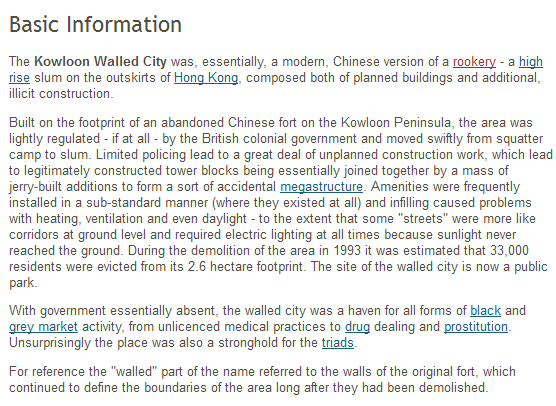 Incidentally, the blue links refer to existing Arcana Wiki entries, while the red links refer to entries which do not exist yet - a good place to get started when writing new stuff!

This includes a short "Sources" section with links where readers can get more information. Often this will only mean the relevant Wikipedia entry, but frequently contributors came across other interesting links that would contribute to the reader's understanding - and inspiration.

Below that, there is a "Game and Story Use" section where both the creator of the entry and others can add their own story ideas in the form of bullet points. The formatting is intentionally looser here, as the ideas can be highly subjective and idiosyncratic - in fact, this part was inspired by the TV Tropes Wiki, which uses the same format when discussing tropes. If someone wants to elaborate on another idea or add variants, they can do that via higher-order bullet points, which can get some lengthy discussions going. 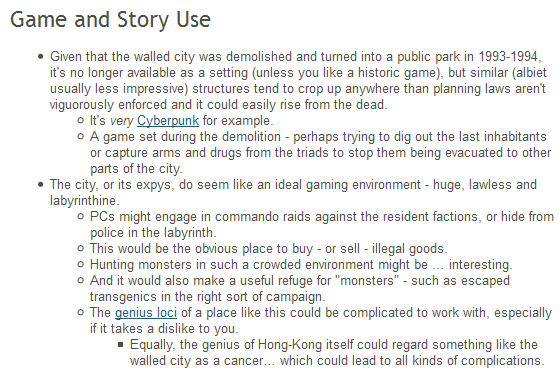 This is the basic formatting for most Arcana Wiki entries. So, what subjects does the wiki cover?

Plenty. While it is nowhere near as exhaustive as the Wikipedia (and how could it be, considering it doesn't have the latter's zillion contributors?), some of the highlights include a Geography section listing real world locations around the world, famous real-world People, Mythological Creatures, a List of Mythologies (which admittedly needs some work, but it does include a basic page for the Cthulhu Mythos), Organizations, sections on Science, Technology, and Magic, a Tropes section loosely based on the aforementioned TV Tropes Wiki, and a Historical Timeline which, especially in newer years, links to all sorts of fascinating news stories (which use a slightly different formatting than the standard entries described above). There are also some tools which use random wiki entries to generate ideas - like the Random Adventure Seeds (which pick three random entries for adventure inspiration), or the Random Nations Generator (I've used the latter to generate villages for my Cold Frontier campaign - see here, here, and here for examples).

But while there is a fair amount of decent material on the wiki, most of the contributions came from a very small number of people. And I'd like to change that - which is where you come in.

The Arcana Wiki needs more contributors on just about any conceivable subject imaginable - and everyone is an expert on something that can be used for gaming. Do you know a lot about fantastic or cryptozoological creatures? Write it up. Do you know about really strange places in or near your hometown? Write it up. Do you have some favorite conspiracy theories? Write them up. Have you studied some particularly fascinating periods of history? Write them up. Inspiration is everywhere, and the goal of the Arcana Wiki is to find it and make it accessible to everyone.

But how do you get started? Well, first of all you need to register - in the beginning I allowed anonymous edits, but sadly the wiki eventually attracted sufficient spammers to force me disable that option. You can register via the link at the top and right.

After that, all you need to do is to click on the edit button at the bottom of the page and start editing.

I would recommend starting small - go to existing pages first and add some gaming ideas of your own. The wiki code is fairly easy to understand - for example, the "Game and Story Use" section of the Kowloon Walled City entry looks like this:

The main code to remember here is:
After a while, you will probably click on one of the red links, which will bring you to a page like this:

Click on the link, and a new page will be generated based on a template of your choosing (the "standard" template is the default, but there are also templates for news stories, calendar entries, and so forth) - you only need to fill in the details and save the results.

After that, the next step is to read the following essays at the wiki:
Furthermore, the wiki has its own forum on which you can ask questions if anything is unclear.


That's it - for now! I hope to see you there, and I will be looking forward to your contributions.
Posted by Jürgen Hubert at 8:01 AM