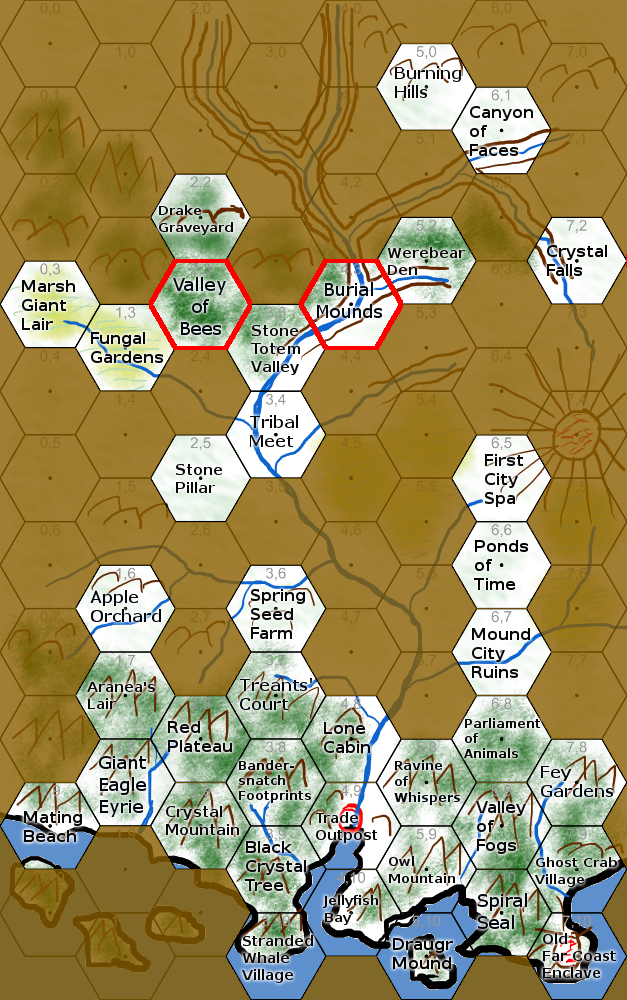 This small valley within the northern cold forests contains a microclimate which is unusually sunny and warm for the region, and during the warmer months is home to innumerable hives of wild bees which swarm far and wide. A nature spirit guards these hives, and while it is possible to receive some honey from the swarms if one knows the proper rites to appease this entity, actively harming the hives can trigger its wrath, whereupon it will organize all hives in the area into one vast swarm. Fleeing at the highest possible speed is recommended in such instances.

Northeast of the Stone Totem Valley the local Inland Tribes buried their honored dead - their great chieftains and shamans. As it is customary among their people, they are buried with weapons and other treasures (occasionally magical) to ease their journey into the next world. Retrieving these treasures is not recommended, as it may incur not only the wrath of the tribals but of the dead themselves, who might rise from their graves to avenge this theft. Others, especially dead shamen, have become undead thanks to their own enchantments or sheer strength of will, and they have buried deep into the ground and into a nearby cliffside. From there they sometimes travel the lands, learn of the latest news, and sometimes appear before frightened tribals to make demands of their descendants. Their goals are unclear, but they do seem to have plans and stay in contact with each other.


Note: A list of all Urbis-related posts can be found here.
Posted by Jürgen Hubert at 7:39 AM