[Urbis] Locations of the Cold Frontier - The Lone Cabin 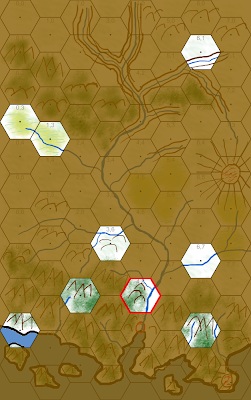 Numerous steep hills rise sharply from the sides of the river in this area. On one of those hills, just before a steep cliffside, is the cabin of "Old Gus" as everyone calls him - a lone prospector who has built his own makeshift mine into the hillside, and actually found a gold vein. Despite this valuable find he has managed to hold his claim against anyone who would wish to take it away (and there have been a few attempts). First of all, he owns two very large and very vicious guard dogs who defend his turf fiercely. Secondly, he has placed hidden bear traps, pitfalls, and other traps over all the approaches to his cabin (and the mine behind his cabin). Thirdly, he is prone to snipe at anyone who approaches despite the numerous warning signs (including one using the skull of a previous trespasser) with his crossbow. Fourthly, he is secretly a minor sorcerer which has given him an edge at a few occasions - but he won't use any obvious powers near other people unless it's a matter of life and death.

Old Gus is deeply paranoid, and he will consider anyone who approaches his cabin and his mine a threat, shooting without warning. The dogs will normally be kept outside the line of sight of people downhill, but released if intruders come too close (they are trained to avoid the traps). If they manage to disable Gus (or sneak in when he is visiting the Trade Outpost at random but rare intervals), they will find large stockpiles of supplies as well as survival and mining gear - and his not inconsiderable profits from the mine.

Ultimately, Gus is not a direct threat to anyone who doesn't approach his home, but his tendency to shoot first and ask questions not at all may cause problems at some point, especially when he shoots someone both important and innocent. As his mine is very close to the Trade Outpost, the PCs should have a clear incentive to integrate it into the colony somehow. How they do that is up to them - they can certainly attempt a hostile takeover (and ultimately, Gus is not much of a threat to an organized party with spellcasters), but that would also send a signal to other colonists. If they don't respect the property of old-timers, then whose property will they respect?
Posted by Jürgen Hubert at 6:52 AM