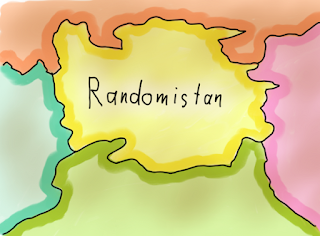 I've mentioned both the Arcana Wiki and its Random Nations Generator before - in fact, I have used the latter fairly frequently for building anything from small villages to entire planets.

The Random Nations Generator is still a work in progress, however - and it always will be, since it uses Arcana Wiki entries as "feed" for its random entries. And it is easy to expand the feed by writing new Arcana Wiki entries and giving them the appropriate tags. That being said, it's probably a good idea to take stock of the current situation and see what is in the most need of expansion. This is also intended as a guide to other volunteers who wish to contribute to the wiki.

Government: Currently at 19 entries, which isn't bad - but looking at the page with the list of governments, there are lots of very iconic government types still missing. Could use some work.

Powerful Organizations: Currently only 39, which is too few since there tend to be a lot more of those than there are types of government in a single nation. The potential variety of organizations is staggering - what should be added next here?

Major Personalities: Currently at 60, which provides more variety than for organizations. Still, if you use the generator often enough the entries will get repetitive.

Major Political Issues: With 142 entries, this category is not an immediate concern - although more entries are always appreciated.

Major Projects: On the other hand, this category has only 40 entries, which is not nearly enough.

Type of Economy: And this has only 10 entries, which is far too few. Unfortunately, I am also unqualified to expand much on this.


So while pre-industrial, modern, and science fiction trade goods are doing okay, fantasy trade goods and especially raw resources could use some major expansion.

Forms of Worship: 32 entries - not too bad, but there are so many different forms of worship out there that there is lots of room for expansion.

Worshiped Entities: 43 entries - and considering all the deities and entities that were worshiped throughout history, this definitely needs expansion.

Major Races/Species: 23 is far too few for such a vast topic, considering all the depictions of sapient creatures throughout history.

Significant Creatures: With 118 entries, we are on much firmer ground here.

Cultural Influences: While we are on safe ground with 92 entries, the problem is that most of these entries are merely "stubs" - largely empty pages for individual countries without any background information.

Historic Events: While 45 entries isn't bad, it could be better.

Dominant Terrain: While 27 entries is not a large number, I don't think this is much of a problem since this is one category where it is okay that entries come up frequently.

Famous Locations: With 177 entries, we have a very nice selection already. Still, the more the merrier...

To sum it up, the main categories that need expansion in my opinion are Powerful Organizations, Major Projects, Raw Resources, Type of Economy, and Major Races/Species. Less urgent, but also in need of expansion are Government, Major Personalities, Forms of Worship, Worshiped Entities, and Historic Events.

I will probably tackle Powerful Organizations and Major Projects by going through the archives of the Suppressed Transmissions Community. Is anyone willing to tackle the other categories?
Posted by Jürgen Hubert at 6:47 AM