Let's begin with our exploration of An-Teng's High Lands! The obvious starting point is the cave where the player characters emerge into Creation. 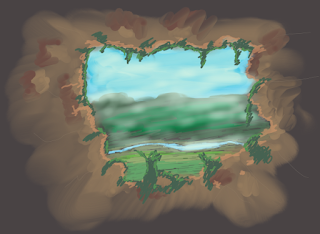 This "cave" is actually the hidden place of one of the five component souls of Yaldabaoth - the one Primordial that "went missing" after the Primordial War and didn't reveal itself during the First Age (unlike the one that triggered the Aftershock War, as described in Dreams of the First Age). Each of the component souls is half in Creation and half on Earth - the Primordial couldn't transfer its entire Essence to Earth, since it would starve there, but this arrangement ensured it still received sufficient energy from the machine that is Creation while minimizing its actual presence there - thus protecting it from the searching eyes of the Solar host. Each of the component souls was "buried" in a different direction of Creation, and this is the Southern location.

And it would still be completely hidden, if not for the work of the Dowager of the Irreverent Vulgate in Unrent Veils - who discovered the Eastern component when it became part of a Shadowland and started meddling with it (turning it into the Well of Udr). This has poisoned Yaldabaoth, and now the component souls can be detected during the five days of Calibration - in this case, the tunnel has a vaguely "techno-organic" look to it. Naturally, the PCs will emerge on the very last day of Calibration, and only if they return during the next Calibration will they be able to learn anything of this place - if they think of it.

I suppose this is as good a place as any to discuss how the "laws of physics" of both Creation and Earth interact. The Exalted developers have stated that they are strongly different in their vision of the setting, which is why you can't just develop Earth technology in Creation. However, I want to take a different approach for this campaign, for consistency's sake - while Creation is an artificial construct within the Wyld, its laws are largely patterned after that of the physical universe - since that's where the Primordials originally came from. So yes, you probably could reinvent Earth technology in Creation - or bring such technology through a gate. Straightforward mechanical devices will fare better than complex electronics though, since everything inanimate that comes to Creation will attract a Small God in fairly short order - and that might have... interesting consequences for things like smart phones and the like. Creation-based artifacts, on the other hand, take the Small Gods into account.

On Earth, on the other hand, artifacts brought from Creation will work, since they bring their Small Gods with them - but creating them on Earth is more difficult, since there aren't any Small Gods around. Thus, you will need to substitute something for them - the Dowager uses human souls, of course, and she has been busy infiltrating the American military-industrial complex...

An added problem is that it is harder to respire Essence - after all, getting access to more Essence was the main reason why the Primordials shaped Creation in the first place! For the time being, I will assume that any beings which can respire Essence in Creation will recover it on Earth at half the normal rate. Heartstones will work normally, though - bring a few before heading there!

But back to the Emergence Cave. I was fairly vague about the location in my old campaign, but looking at the map I've decided to put it at <6,9>. 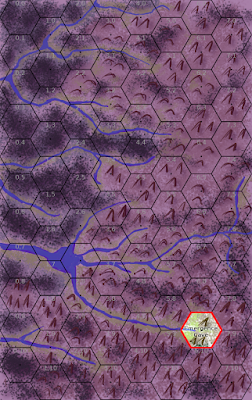 That's a fairly remote location, away from major settlements and the trade route to the Lap (which follows the river to the north that flows through <7,6>. It also has a clear path for the PCs to follow - they can just walk downriver until they reach the Jade Plum Citadel at <1,8>, where they will likely head so that they can learn more about this world. And on the way, I can place some showcase locations and encounters to emphasize how this world differs from Earth...
Posted by Jürgen Hubert at 11:49 AM

Email ThisBlogThis!Share to TwitterShare to FacebookShare to Pinterest
Labels: an-teng, exalted, maps, rpg, sandbox, there and back again