After Victory - How It Came To Pass

The Evil Empire has fallen!

Abraxas, called the "Dark Lord", the "Living God", "Defiler of the Earth Mother" and many other names besides, undisputed tyrant of the Empire of Owls and terror of three continents for more than two centuries... is no more. The Sirean Alliance, forged under desperate circumstances, staged a daring raid against his ancient capital of Strigium while he was distracted, and at the same time some of the world's greatest heroes invaded his inner sanctum inside of the lair of the Earth Mother and severed the link that sustained his stolen divinity. Though it cost many of them their lives, they triumphed and Abraxas fell, his works now in ruins. The forces of Good have triumphed, at a heavy price.

But the story is not over... 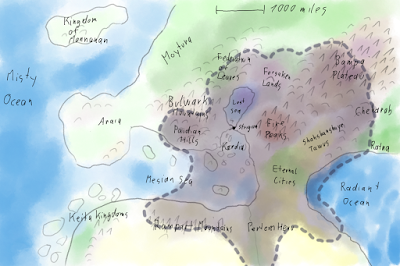 The victorious nations of the Sirean Alliance are united in their belief that the Empire of Owls must never rise again - but now, bereft of some of their greatest leaders, they find it increasingly difficult to agree on anything else. The Empire was huge and consisted of many people and cultures, ruled by quisling kings, sycophants, monsters, and worse. Ruling it in Abraxas' absence, administering these vast territories, and rebuilding them into a more peaceful form is a daunting task, made much more complex by the many voices in the Alliance - some of whom just want to go home, while others are trying to shape the future to their own nation's advantage.

Abraxas' end came in the fall. The winter was long and hard, but cleansing, and the last of the warlords who attempted to claim the Throne of Owls for themselves were defeated. Now at last, spring has come, and many are beginning to hope for a better future. But too many of Abraxas' plots and minions remain concealed, and may yet threaten to undo the fragile peace. Former spies and enforcers band together in crime rings. Resentful soldiers of his fallen legions turn to mercenary work or banditry. Merchant princes who lived off the plunder of many lands and sold slaves throughout the Empire now use hidden stockpiles of wealth to reinvent themselves and their houses. Chaos might yet engulf the land - and perhaps one day a new Dark Lord will arise from the chaos.

In this realm of hope and chaos, great wealth and great desperation your player characters will have to find their own path. Perhaps they are discharged veterans from either (or both) sides of the conflict. Or perhaps they have been ordered to act as administrators or troubleshooters for one small corner of the Empire by their superiors in the Alliance, trying to establish peace and order with few resources against great obstacles. Will they succeed and help restore the land to peace and prosperity? Or are they just another group of scavengers feasting upon the succulent corpse of the Empire?

So what's all this, then?

After Victory is a setting idea I've been musing for some time - indeed, you can see its beginning in this post back in 2015. It is based around the question: What happens after the Evil Overlord is overthrown? This is not addressed in The Lord of the Rings and similar epic fantasy stories - at best, you get an epilogue which addresses the fate of the primary protagonists, but there is little about the political aftereffects.

Yet as we know from real world history, defeating and occupying another nation rarely ties up neatly - history ever marches onward. Some were ultimately great successes, like the post-WWII occupations of Germany and Japan - while others were spectacular disasters, like the occupation of Iraq after 2003.

And in the setting of After Victory, the fallen Empire of Owls could go either way - and the player characters' actions should be able to make a crucial difference.

Right now, the setting is still in development, and most of what I have come up with can be found in this RPGNet thread. However, it is my eventual goal to publish this as a standalone setting, similar to my other work Doomed Slayers (buy it if you don't have it already! Review it if you have!). I have rough outlines for the various regions shown in the map above, and future blog posts will go into further details on them. But first, I'd like to state my base assumptions about this setting:

- Overthrowing and defeating Abraxas was just and necessary. He was not just some "benevolent despot" like you might see in fiction, or a "Tough Man making Tough Decisions" - he was evil and everything he did was ultimately for himself. Some people might have benefited from his actions, but that does not imply any benevolence on his part. He made the world a worse place, and would have continued to do so every year he was in power. Now, after the war's end, plenty of his followers will make excuses for him (as it was the case after the fall of the Third Reich, or the Confederacy), but they are morally in the wrong.

- Abraxas was defeated by true heroes. They might at times have squabbled and had differences of opinion, but ultimately they banded together against overwhelming evil and - with great sacrifices - they won. Many of these heroes have paid for this with their lives, and others are in retirement or are overwhelmed with their now political jobs, but their actions show that it is possible for Good to triumph - in other words, this is not intended to be a "grimdark" setting where you must commit evil to defeat a greater Evil.

- Establishing peace is in its own way just as hard as winning the war. Indeed, the task may be altogether impossible when one considers its scope - the occupiers find themselves in strange lands with strange customs, steeped in generations of corruption and evil with few legitimate figures of authority that can be trusted. Yet they must at least try, or else new warlords will rise and menace the world anew.

And if the PCs are not interested in all that, they can join the throngs of treasure hunters seeking the many caches of hidden loot, and attempt to strike their fortune. Either way, there will be plenty of opportunities for adventure!


So, what are your thoughts so far? Share them in the Comments section!
Posted by Jürgen Hubert at 6:16 AM

Email ThisBlogThis!Share to TwitterShare to FacebookShare to Pinterest
Labels: after victory, rpg, setting