As a major city, Jade Plum Citadel is surrounded by several market towns within a day's distance of travel. The market town situated in the valley downriver from the Emergence Cave is called Three Ponds Market, named after the three circular lily ponds in the center of the town which surround the local market. All in all, it's a prosperous, quiet, orderly town - while there is some rowdiness associated with visitors, these are generally encouraged to stay in the hostels just outside the actual town limit. People in the town respect their elders and their social superiors, and are stoic in the face of adversity. 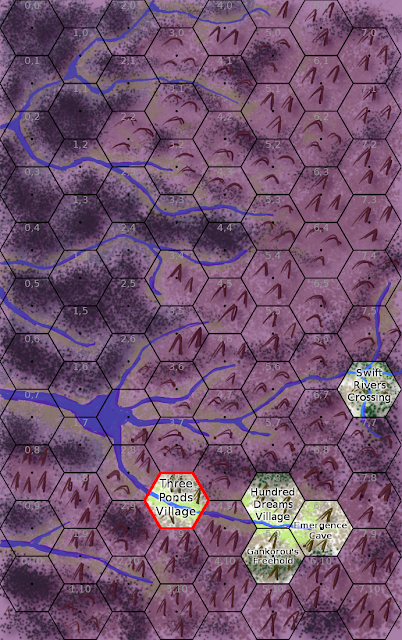 But there is more to Three Ponds Market - the town is, in fact, the center for the cult of the Seven-Stranded Vine for the High Lands. The leaders of the cult effectively run the town, which is reflected in the orderly and hierarchical atmosphere - aristocrats before artisans before common laborers (each have their own third of the town). The three ponds are in fact a reference to the Three Spheres Cataclysm, though none alive remember this. The cult headquarters are in underground chambers right below the market, with entrances/exits to all three town districts.

The PCs are unlikely to realize anything of this unless they go looking for it (and being new in this land, they probably have no reason to search for this cult). However, they might get involved with this town nonetheless when they spot burning opium fields outside town - there is currently a conflict between Generous Agun and Prosperous Fanaka over control of the local opium production. Generous Agun currently controls the fields and is somewhat more acceptable to the population despite her Guild ties, as at least she is a native Tenges. Prosperous Fanaka desires these fields and has hired assorted thugs to convince the townfolk to align with him.

Once again we turn to the Random Nations Generator to work out the details. We get Theocracy as the government, which we already knew (that is, the Seven-Stranded Vine is in charge). Among the organizations we get Deep State - appropriate for a town that is ruled from behind the scenes, but Deep State implies a bit more than that. Let's say that the cult has managed to subvert at least one of the noble families from the court of the Jade Plum Citadel, and make a note to return to them later. Another entry is Quiverfull - many religions are passed on from parents to children, and it makes sense that a secret cult of Yozi-worshipers that already has a strong theme of "obedience to family" would view things the same way. Female cult members are encouraged to have as many children as possible, and those who have had six children already are awarded a special honor - they will gain the opportunity to be impregnated by one of the surviving male descendants of the original royal family of An-Teng (such as Night Butterfly - see Blood and Salt, p. 30), and these children will become part of the lesser nobility of the realm once the Dragon-Blooded are overthrown and the true royal family restored to the throne. A third entry is Eastern Lightning, a Chinese apocalyptic cult which uses "violence, kidnapping, and brainwashing for both recruiting new members and resisting the Chinese government". So far, this branch of the Seven-Stranded Vine doesn't want to attract attention and has been very selective when it comes to kidnapping and brainwashing people - but they do use these methods from time to time.

Among the major personalities we get Eddie Chapman. A womanizer, criminal, and safecracker who turns into a double agent has potential. However, I think it's best if our "Eddie" - let's call him Quick Chanchai - is still in the "crook" phase of his career. He will hang out with the foreigners in town, spot the PCs - and, if they look like either destitute, desperate, or shifty, will try to convince them to help him rob a local villa (apart from trying to flirt with female player characters). What he asks of them is to stage a distraction at an opportune moment - as foreigners, they will draw lots of attention if they act strangely, which he can use to slip in unnoticed. He will promise them a part of his take (depending on their risk) and pay it. Alternatively, he may run afoul of the Seven-Stranded Vine - or he might abscond with some sort of important cult artifact which will come to haunt him later - or the PCs, if they end up with it.

And as it happens, another "major personality" in town is an Artifact of Doom. Looking at the assorted sub-souls of She Who Lives In Her Name, a Luminata (The Deer Who Hunt Men) seem appropriate. It is bound to a small urn covered with writhing branches and studded with three rubies. A cult member can invoke the Luminata by filling the urn with burning poppies and saying the right invocation in honor of the Living Tower. which will then hunt down an enemy of the cult when they are alone. Someone carrying the urn or sleeping nearby who does not know the proper rituals will first dream of the Luminata and being hunted by it, only to be eventually hunted by it in the waking world. When "slain", the Luminata does not return to Malfeas but to the urn, until the urn is destroyed. 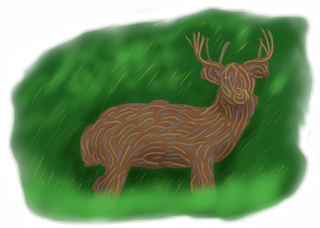 A third personality is Cleon Skousen, the famous anti-Communist conspiracy theorist. Let's turn that into Venerable Ruthai, the town matriarch and local cult leader, who is writing and publishing anonymous pamphlets decrying various Dragon-Blooded crimes against Tengese virtues, Tengese family, and the "natural order" under the pseudonym of "Truth-Teller". The PCs will likely encounter various pamphlets during their time in An-Teng, and newer pamphlets might even refer to their own adventures once they get tangled up in the affairs of the Dragon-Born. Her villa has a printing press (using woodblock carving) that produces more pamphlets, and as a result the town has a significant number of skilled wood carvers.

Another entry is Isaac Newton, whom we will turn into Far-Sighted Manee, an astronomer and cult member who has her own observatory on top of a nearby hill and who has written quite a few texts about the "perfect order and hierarchy" of the heavens. She maintains extensive correspondence with Prince Kiotaran of the Middle Lands, who shares her interest in Astronomy (though he remains ignorant of her cult leanings).

Quite possibly it's Mournful Mongkut's villa that Quick Chanchai wants to rob...

None of the "Major Projects" seem to fit for a town of this size, and neither do the entries for "Economy". Among the "Major Products/Exports" we get Pigs as well as Candles - which can be made from tallow rendered out of animal fats. Thus, we should note numerous pig farms in the area, as well as many butchers and tallow producers in the poor part of town (naturally, the inns for foreigners will be next to those).

Considering the cult presence, the "Forms of Worship" for this town are especially interesting. We get Nazirite, a form of asceticism where someone undertakes a vow to abstain from wine, cutting their hair, and not come in contact with corpses or graves for a specified time - at least 30 days. Another entry is Anchorite, a religious hermit who lives in a cell and avoids contact with the outside world. While the cultural context is different, it should be noted that Thai culture does have "temporary" (Buddhist) monks. Thus, let's say that those who have been chosen to join the Seven-Stranded Vine (or rise further in its rank) retreat from the world for a while in order to contemplate the Principle of Hierarchy (and especially favored cultists may be granted visions of demons). They sit in up to 9 small cells carved out of the mountain next to a spectacular waterfall. The town youth take turns every morning and evening to bring the monks food (rice and vegetables) and replace and light their large tallow candles (which the monks aren't allowed to touch because they are made from dead things). The path they use for this purpose leads up to Far-Sighted Manee's observatory.

Another Form of Worship is Prosperity Theology - the cult teaches that in a properly-ordered society those who are the most devout to She Who Lives In Her Name will also be richer due to their higher station, while those who are rich should join the cult to pay her the proper respect for their affluence.

This should be enough material for the time being - if needed, I can always expand the town further.
Posted by Jürgen Hubert at 7:09 AM