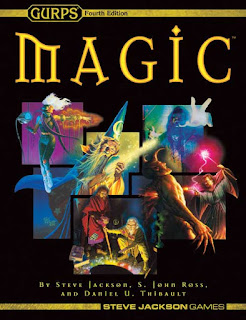 GURPS 4E has published a large number of systems for magic over the years. My own personal favorite, however, remains the standard GURPS Magic system, largely because of its huge number of spells which cover most standard fantasy magic effects.

But that doesn't mean that this system is not without its problems. In fact, the book is somewhat notorious because it was rushed out for publication without proper playtesting early in the 4E product lifecycle when Steve Jackson Games still wanted to "publish one hardcover a month", a policy they have long since given up on in preference of smaller PDF supplements. Certain spells are rather unbalancing, and it is my impression from several high-powered campaigns I have participated in (ranging up to 500 character points and involving as much as Magical Aptitude 20) that the system will break down at higher power levels.

However, it is my opinion that the system is not unsalvagable, and I have developed a number of changes (originally discussed on this forum thread) which I believe will address most of my problems. I haven't actually tested most of them yet, so any feedback is appreciated!

Let's start with the overall rules of the magic system before delving into the individual spell descriptions. All page references refer to GURPS Magic unless stated otherwise.

-3 for each point of energy cost reduction
-3 for each halving of the casting time (requires the "Quickened Casting" perk, below)

3. The effective spell skill level is further reduced by the number and type of spell maintained. This penalty is called the “Maintenance Penalty” and calculated as follows:

-3 for each spell that requires concentration, -1 for other spells
-1 for each point of energy cost reduction of maintained spells (up to the maximum cost reduction at the time of casting). For example, reducing the maintenance cost for a spell by 2 would add -2 to the Maintenance Penalty, and it would only be possible if the caster took a penalty of -6 or more to the initial casting roll in order to reduce the energy cost.

4. If some effect "attacks" the spell (such as Dispel Magic), then the spell "resists" with the unmodified spell skill level minus the Maintenance Penalty.

Magic Item enchantment generally works as described under "Quick and Dirty Enchantments" (p. 17), requiring one hour per 100 energy points. However, instead of requiring fatigue or similar energy resources, enchantment consumes "Enchantment Materials". Depending on the particular campaign, there might be "universal enchantment materials", enchantment materials for a specific college, or even materials unique to a particular enchantment. However, whatever they form they should cost approximately the same as what a professional enchanter asks for each energy point of a "Slow and Sure Enchantment" - in other words, $33 in typical TL3 fantasy worlds (see "The Economics of Enchantment", p. 21). It should be assumed that major enchanting circles/guilds can acquire such materials with significant bulk discounts that ensure their profits.

Notes: The existing "Slow and Sure Enchantment" rules basically required an enchanter to drop out of adventuring for months or years for serious projects, and thus effectively limited this to NPCs only. I wanted to make the Enchantment College to be useful for player characters as well without unbalancing it.

If someone tries to enchant an item which already has one or more enchantments on it, then the enchanter has -1 to their effective enchanting skill for each existing enchantment. Improving a "leveled" enchantment like "Puissance" does not count as an additional enchantment for this purpose.

Notes: If an enchanter has the required resources, making a "combination item" with lots of enchantments and high levels of the Power and Speed enchantments is very effective, as these will benefit all other enchantments on the item. I wanted to make this combination considerably more difficult without making it impossible.

The following new perks are available for mages.

Emphatic Casting
By being loud and emphatic with the incantations and body movements and doubling casting time, the caster gets +1 to his effective skill.

One-Handed Casting
Allows casting spells with one hand, for a -2 penalty

Quickened Casting
Reduces casting time by half, for a -3 penalty. This is subject to the usual limitations on magic rituals (see p. 8).

Still Casting
Allows casting without foot movements, for a -2 penalty


Coming up next: The spells!

Posted by Jürgen Hubert at 8:43 AM