The world seems familiar. Besides humans, elves, dwarves, orcs and many other fantastic creatures inhabit it. Wizards cast mighty spells, while priests summon divine miracles. There are many worlds like this one.

And like many similar worlds, this one gave rise to an Dark Lord. His orcish and undead hordes poured from his Bleak Lands and overran many countries - until they were finally defeated by an alliance of nations fighting for their freedom. His armies scattered on the fields of battle, the Dark Lord was slain by a band of heroes, though at a great cost. The End. 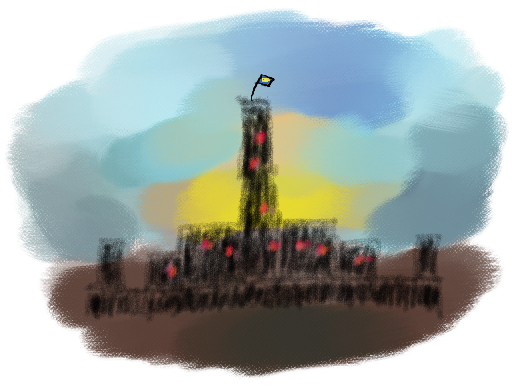 Not so fast. While the armies of the Alliance stand victorious in the Bleak Lands, the Bleak Lands are hardly safe. The orcs and undead have scattered, but are not eradicated. Not all of the Dark Lord's lieutenants have been slain, and even those who reportedly died might have found a way to cheat death - even now, they might lurk in the shadows and plot their own rise to power.

And what of the former conquests of the Dark Lord? In many, the ruling families were slaughtered, to be replaced by quislings - who should rule them now? In others, all pretense at local government was abandoned and replaced by brutal military governors - and in their absence, anarchy and strife reign. Some others nations even joined the Dark Lord willingly, either out of fear of reprisals or because they hoped for special favors - but can the leaders of those governments be left in place, or must they be punished for their crimes?

A dangerous power vacuum is beginning to form, which will likely be filled by warlords and worse if nothing is done. Many of the leaders of the fraying Alliance are recognizing this and desperately try to impose some working order. But the morale of the occupying armies is plummeting - their soldiers marched to rid the world of a great Evil, not to stay on as occupators after said Evil was defeated. Already, many of the military units have been recalled home, and desertion is high among the remainder.


Basically, this campaign frame starts where other campaign ends - after a Big Bad has been defeated. The general chaos and anarchy of the occupied lands works similar to the "Points of Light" type of D&D settings - there are a few "safe havens" and plenty of danger outside of them, and there is plenty of loot to be had. However, this campaign frame also allows for plenty of politics - I recommend studying the politics of occupations throughout history (starting with the recent occupation of Iraq) and their many shifting political factions and conflicting agendas. The PCs - who presumably start out as veterans of the occupying armies, can either try their own hand at nation-building or just try to profit from the situation as much as they can before getting out again.

Note: This idea was originally developed in this RPGNet thread.
Posted by Jürgen Hubert at 6:24 AM